skip to main | skip to sidebar

THE NEXT BIG THING

Emily Kendal Frey tagged me in the interview project, The Next Big Thing.  Here are my answers to the questions regarding my current project.

1. What is the working title of the book?

Journal of Ruin and Repose

2. Where did the idea come from for the book?

Hauntings, love in the ruins, the perspicacity of human emotions, the possibility that one needn't get everything one wants in order to be happy, leaving an inner exile to rejoin the world.

3. What genre does the book fall under?

4. What is a one sentence synopsis of your book?

5. How long did it take to write the first draft of your manuscript?

Not sure.  The book is divided into sections and I wrote each individual section fairly quickly, in short bursts, but with breaks in between.

6. Who or what inspired you to write the book?

Certain autobiographical considerations, Stargate and self-help gurus, the necessity to examine the reality of the many manifestations of love.

7. What else about this book might pique a reader's interest.

You can read a poem here.  It's from a section of the book called 'Love in the Ruins.'

8. Will your book be self-published or represented by an agency?

I hope it will find a publisher.

My Definition of Rape

It isn’t about skirts I said me in skirts to sew up meanings yr light said all over my butter this breakfast I spread the butter just drinking the milk & had phenomenological butter that didn’t feel good doctor throwing my torn leg my green skirt.

until it’s over
torn over.

We won’t be yr silent allele.  A woman means:

Posted by Jenny Drai at 1:49 PM No comments:

Okay, I Admit It. I Am Related To Dracula. 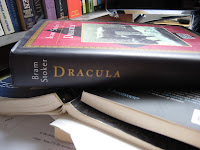 As anyone who knows anything knows, the two greatest exports of Romania are Dracula and orphans. However, if you were a German citizen of the city of Munich, circa 1997-1999, you might have thought there was a third export: ME, Jenny Drai! Isn't that funny?

At first this came as a big shock to me because whenever I asked my Dad what nationality we were--usually in response to some class project that would inevitably end in one student bringing in Lithuanian baked goods to share (LOTS of powdered sugar) and another kid showing up for class in some sort of Balinese get-up--he would just say that I should tell everyone we were American-whatever the heck that might mean.

But what did he expect me to do when it was my turn to present? Sing My Country Tis of Thee as I waved an American flag in everyone's face? In short, the answer is yes.

After all, didn't Grandpa purposefully forget every word of Romanian and shed a vowel from his last name before he signed up to fight in WWII? And before that, didn't my forefathers participate in the greatest fight of all: Chicago's epic battle against Prohibition, by making wine in their bathtub that they sold for rolls of cash to shady dudes who definitely bore relations to the mob?

But nobody in Munich ever suspected the American in me! No doubt this is because the first thing I did upon setting foot in the heart of Bavaria was to lose 20 lbs and trade in my slouchy, oversized wardrobe for cheap Versace and Gucci knock-offs purchased at H&M with cash well-earned from nannying the baddest little boy in the world, to whom I will only refer to here as L. Also I spoke German quite well with only an untraceable accent (mostly thanks to a previous residence in the country in the vast, depressing, it's-always-drizzling Schlesswig-Holstein), somethings most Germans think Amis (as we are called) are incapable of doing.

Luckily, I was able to pick up some great house-cleaning gigs though! Because cleaning women, after all, are another great import!!

Signing off--Jenny Draia (now wouldn't that have been pretty??)
Posted by Jenny Drai at 9:39 AM No comments:

OMG! I Almost Deleted My Entire Blog! And It Felt So Good To Think About Doing It!!!!!! Or, A Few Notes On Humor. 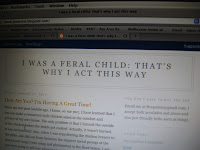 When I first started my blog, it was really easy to be funny. This is probably because my subject matter--the infusion of sex into film adaptations of Beowulf--and a cute little house cat supposedly named after the film actor Gerard Butler, were in and of themselves quite amusing. I do deserve some credit of course. But still.

Lately though, humor has become a trap. Especially humorous indignation. I recently wrote a pretty autobiographical short story about how my mother wouldn't let me listen to music when I was growing up and sent it to a contest at a magazine I have been reading for awhile. I included a line that I will not repeat here, but basically it was pretty hilarious at the expense of my mother. Basically, if she ever read it, I'm sure she would be hurt. Go for the joke! I thought, which I now regret. (The reality is that often callousness hides extreme vulnerability and sensitivity, and I would cop to that on some level.)

But the plot thickens.

Recently I was at a party and something happened that really bothered me to the core, which I then turned into a supposedly humorous joke for my blog. I was reading a book of poetry that very specifically discusses the U.S. military occupation of Guam, and I had at that time the book in my purse. Randomly, a woman I met just that night started saying some things about the native Chamorro people of Guam that I thought lacked insight, compassion, and any sense of wisdom.

But please don't misunderstand me. I wasn't shocked because she said something I considered off-color. Like I've never said something 'off-color.' And probably every white person my age has at the very least had to deal with the disappointing racism of his or her elders, whether it be an otherwise much-beloved grandfather dropping yet another n-bomb at the dinner table or fave-author Sylvia Plath's degrading portrayal of the "negro" orderly who brings two kinds of beans to the hospital dinner table in The Bell Jar.

What bothered me was that I couldn't think of anything to say. I was chewing a mouthful of Doritos at the time, and I think my mouth may have opened up a little bit, a situation which I tried to frame comically in my now deleted post.

I think it was because I had the book in my purse.
Something about the nature of proximity.

Every so often I get the feeling of hives rising up all over my body. Standing in the shower room at Dachau was one time. Finding out that a place named Psycho Donuts in Campbell, California had come into existence while featuring an atmosphere that purported to mimic "a fun, zany mental hospital" [HELLO! THERE IS NO SUCH THING!] with donuts named after diagnoses from the DSM-IV was another time.

At Dachau I burst into tears. After Psycho Donuts I walked around for two weeks and thought everyone was staring at me. After the comment about Guam I just felt dislocated and inarticulate and tried to push the event into a familiar framework. Everything about the incident was commonplace and mundane. The humor of the commonplace and mundane has thus far been the theme of my blog. But really, maybe humor is sometimes the wrong note.

Finally. The wrong note. Something I have in common with the brainiacs behind Psycho Donuts.

Lately I have been a bit off. And sort of sick of social media. Sort of sick of all the things I am 'supposed' to be doing as an aspiring novelist to get myself published. Of creating something to say just to prove that I have said it. Oh look! Relevance!

I am currently thinking that I would like to try to work on something that directly looks at the cultural/psychological aspects of mental illness (anxiously awaiting the July release of Bhanu Kapil's Schizophrene from Nightboat Books on that note) as opposed to the hold contemporary psychiatry and its deeply entrenched ties to the drug industry presently have over our current methodology of treating the mentally ill.

I think this will take the shape of a novel that will require some research and tenacity and OMG horrifying concepts like extensive outlining. (Up to now, I admit, I have always just planned a chapter ahead of time.) And I am pretty, pretty sure, that although it may be warm, maybe even sometimes funny (because, Virginia, hallucinating in the bathroom at work can be funny depending how you look at it--as long as there's no donut named after it), I will not be going for the joke.
Posted by Jenny Drai at 11:01 AM No comments:

How Are You? I'm Having A Great Time!

Since my last post (awhile ago, I know, so sue me), I have learned that I too can make a restaurant style chicken salad in the comfort and privacy of my own home. The only problem is that I burned the outside of the chicken before the inside got cooked. Actually, it wasn't burned, it was caramelized. Also, when I was transferring the chicken breasts to the plate, one slid out from between the slippery metal prongs of the ginormous tongs I was using and plummeted to the floor below. I am not even going to tell you when the last time I swept the floor was.

Okay, I will tell you. It was not recently.
Obviously I am no Martha Stewart.
I am pretty sure that 'hi-jinks' do not ensue when Martha Stewart cooks.
Thank you.
Posted by Jenny Drai at 8:48 AM No comments:

Labels: There was a piece of fuzz on the chicken

Tired And Bored With Myself

But then how do you think I made it out to California?
Posted by Jenny Drai at 7:42 AM 1 comment:

Labels: Not to mention it's raining

A Few Words About Jane Seymour

Such wholesome, good fun.
Even when she's naughty.
Posted by Jenny Drai at 10:08 AM No comments:

You Don't Have To But You Can

Email me at fivepoints@gmail.com. I accept both accolades and abuse and also just friendly hello sorts of things.